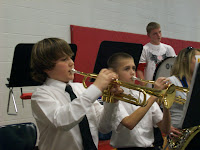 Another long night in Noel….but well worth it. This past Friday, Noel held its winter concert. The concert featured music classes from grades 3-6, and also the jr. high band, grades 6-8. All of the music students played a recorder during the performances. In the videos below, the sixth grade is performing what is called recorder karate. This is a program that provides practice for the students while rewarding them with karate belts for their recorders. The belts are pieces of string that the students tie to their recorders. These belts are given out to students that are able to play selected music on their recorder.

As I said before, the jr. high band was involved as well. Here some video from their performance.

All those that participated did an outstanding job, and provided a great show!