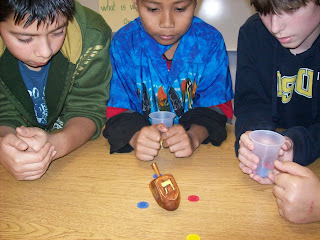 Ahhhh, the classic game of gambling…. as a part of our study of Hanukkah today our class split into small groups and played a Jewish children’s game, Dreidel. This game is played with a wooden top that has four Jewish letters on each side.

Above is a short video of some of our boys playing Dreidel. This is a game with simple rules. Each player has ten coins/tokens, and each player places one coin in the center (pot) before anyone begins a turn. Once everyone’s coins are in each player takes turns spinning the Dreidel, when the Dreidel stops on a letter the player then must follow what that letter says. Example: nun = no coins received, gimmel = take all the coins in the pot, hay = take half of the coins in the pot, shin = place one coin in the pot.